We mentioned on Facebook that our meeting with Dr. Nelson Musoba ended with Nelson agreeing to be our newest board member. Nelson brings with him a wealth of experience as former Senior Planner for the Ugandan Ministry of Health; now working on the Ugandan AIDS commission. We are very excited about this news!

We departed on Saturday for Kalonga in the north of Uganda. The trip was 7 ½ hours but the roads had recently been graded so the voyage was easier than expected.  That said, the driving in Uganda is very aggressive and they don’t give way to small children, pregnant women, or animals. We thought that a driver for a religious organization might have a soft spot; nope!  There were numerous times where we closed our eyes as we brushed past humans and animals at a very high speed. 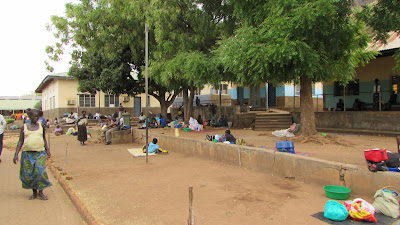 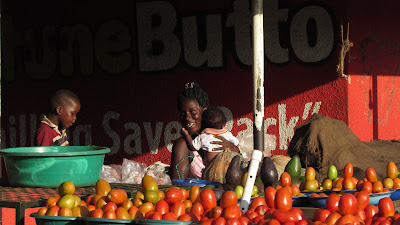 The trip was filled with sights not familiar in the US.  Perhaps the most difficult was driving past a group of women sitting on the ground in the hot sun breaking rocks into gravel with hammers.  I couldn’t help but think about how our scholars are saved from perhaps equally difficult lives.  By contrast we would pass children happily playing in a stream, turned red by the gorgeous earth. I had to chuckle at the sight of a solar panel, the size of an ipad, on the roof of a grass hut. Talk about two worlds colliding. 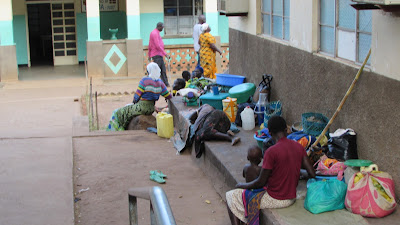 The land became more arid, and the water less visible, as we traveled north.  At each village we started seeing wells where children and women filled their “jeri cans”, then walk several kilometers with them balanced on their heads,.  Sticks were driven in the ground around the well to keep the free roaming livestock out. We passed a creek where women were gathered with their fishing baskets and boys with their fishing sticks. Apparently this small creek is well known for producing large fish.

Our arrival at the midwifery school, and affiliate, hospital was an experience I will not soon forget. The scholars began singing as they saw us arrive. We were presented with beautiful handpicked flowers. I was unsuccessful at keeping tears back. These young women are so grateful for support and know full well how their education is not only going to change their lives but the lives of all those they will serve.

We got a special treat when one of our TGF graduates from the midwifery program arrived to personally thank us for supporting her.  We recorded an interview with her. I don’t know who was more nervous, Angela being interviewed or me trying to put into practice all the wonderful equipment and instructions that our dear friend Rip Charbonnet had provided. After the interview we got a real treat as we watched the students in a “skills lab”. Sister Carmel stepped in to ask additional questions of the students; she soon had all of us laughing while learning at the same time. Sister should have her own stand up comedy show.

The hospital grounds are filled with pregnant women waiting to go into labor. These women are from remote villages with no midwife or health clinic. Our midwife scholars are committed to working in remote areas, upon graduation, to stem the risk of maternal and infant death. As we walked back towards our lovely guest house we passed a structure that was built in 2003 to house the hundreds of “night commuters”. More later about two of our scholars that lived thru the war.
Posted by The Gretta Foundation at 10:39 AM