Our visit to Kolongo was powerful in so many ways. We met with our first midwife graduate. Angela conveyed how difficult it was to lose patients in her remote region due to lack of training.  As a TGF "scale up" scholar from Certificate to Diploma Midwife, Angela is grateful for the training that
translates to saved lives. 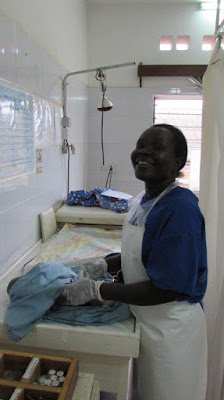 Our wonderful Sr. Carmel took us through the hospital where we saw mothers in various stages of labour. This photo shows a small bundle of cloth on the back counter. We opened the cloth and met Baby Sean. Baby Sean would have been the first born to his parents but died because his mother refused a cesarean section until the last moment.

While sister was explaining the circumstances,
a woman in labour walked behind us to the birthing table. We were video taping Meg at the time and despite our mourning had to chuckle silently as we picked up the mother's groans as she pushed and then the "kerplush" as her water broke and baby cried.

Life and death in such a delicate balance. The incredible midwife (that had helped deliver Baby Sean hours earlier, while monitoring several other mothers in labour) came beside us with a beautiful new baby boy. No words.
Posted by The Gretta Foundation at 10:47 AM